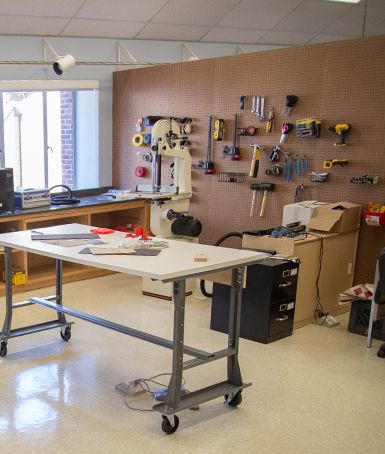 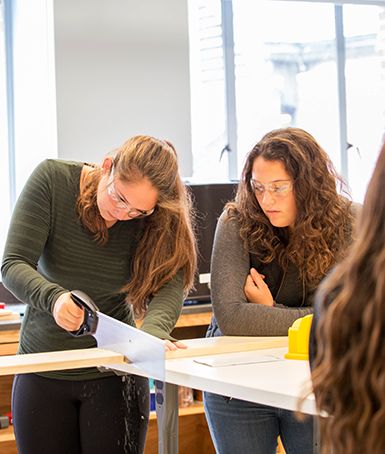 Innovations: Shipley's MakerSpace Takes STEAM Learning to the Next Level

More than just a classroom to host engineering, design fabrication, digital fabrication, robotics, and computer programming courses, the Upper School’s new MakerSpace adds Shipley to the growing list of schools participating in this national trend in education. “I liken it to a modern day workshop,” explains Fornaro, “where 20 years ago, students took shop class and built things like bird houses and balsa wood bridges. Now, we’re taking it to the next level by incorporating lots of technology and applications from the real world.”

The design of the Upper School’s MakerSpace represents a collaborative effort by Fornaro, Director of Educational Technology Wendy Eiteljorg ’86, and Director of Technology John Zelek, who all teach Upper School STEAM courses. After visits to other schools and lots of research, the team was able to make their dream a reality in the summer of 2015, creating a space that supports Shipley’s existing curriculum, while providing flexibility for future growth and changes in STEAM programming.

Shipley’s MakerSpace is divided into a workshop and traditional classroom space. Students have a variety of tools at their disposal, including three 3-D printers, a laser engraver, a drill press, a CNC router, hand tools, and a band saw. Design features like a pegboard wall and white boards that slide over existing closets maximize workspace without sacrificing valuable storage. On the classroom side, large tables provide space for collaboration, while workbenches around the perimeter of the room provide storage and extra workspace with roll-out benches. Every detail was carefully planned out to utilize space for the community.

Looking to the Future

Fornaro celebrates Shipley’s new MakerSpace, but envisions an evolution in how the space is currently used. “The MakerSpace we have now is still a classroom, which is a model that I would try to get away from, so that it can be an open space at all times. The true essence of a MakerSpace is like a library – where students can drop in and work on projects that they are interested in, learn new skills, and put those skills to use.”
Fornaro also hopes to increase opportunities for collaboration with his colleagues in other departments. “Continuing partnerships with other teachers is pivotal to growing the program,” explains Fornaro, who has already worked with teachers in Shipley’s art and history departments to help them complete projects in their courses.

The addition of a MakerSpace to Shipley’s Upper School is just one example of the School’s commitment to its growing STEAM program. The efforts span all three divisions, starting with the Lower School’s weekly Innovation Day, which gives students the opportunity to tinker with different projects. In the Middle School, students take a design class in sixth grade, they can participate in the MiniMakers Club, and they are exposed to a number of STEAM-oriented projects through their regular curriculum.
At all levels, the STEAM curriculum and the MakerSpace aim at exposing students to the iterative design process, which begins with brainstorming, then moves to prototyping, building, and analyzing the results, then starting over to improve on the outcome. “Nothing is ever perfect,” says Fornaro. “A product or technology may be at is best stage for the moment, but tomorrow brings a new day.” The same is true for Shipley’s MakerSpace, which Fornaro and his team have built to adapt as change happens. You can follow Shipley’s MakerSpace efforts on Twitter by following @Shipley_Makers.
Back