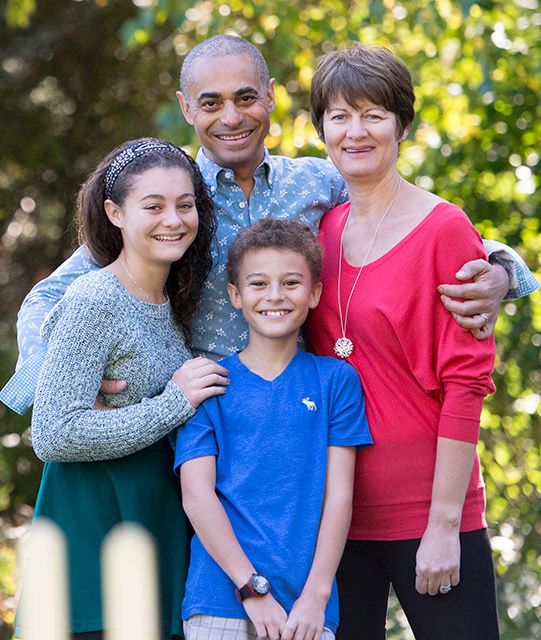 11/30/2015
Kathy Smith
When the Bender family faced the prospect of a second cross-continental move in as many years, they knew it would be important to find a school that shared their values and provided a rigorous academic program balanced with support for students. The Benders found that school in Shipley and have enjoyed a seamless transition into the community. Read more about the Bender’s Shipley story.
Changing schools can be emotionally and logistically difficult. Moving and changing schools, even more so. But relocating from across the Atlantic after just having settled in a year prior with a six-week lead-time? Nearly impossible.

This is the Bender Family’s Shipley Story. It is, on the surface, a story of relocation and transition. At its depth, it is a story of a family, working in unison to make the very best decisions possible, using their values as a guide, and greeting change with a sense of adventure. It is also a story of a school, cognizant of the challenges every relocating family faces, and working to pave the way for the smoothest transition and happiest outcome.

Let us go back to that evening just over two years ago in England, when Deborah Waterhouse and Lloyd Bender were faced with the prospect of telling their children about yet another potential family move. Deborah had received a compelling offer from her company, GlaxoSmithKline. At the time, Lloyd Bender, a successful ophthalmologist, and their two children had just settled into their new school after having moved the prior year from Australia.

James ’22 shuffles a deck of cards in his hands as he recalls the evening. “When you said, ‘We just want to tell you something,’” he says, directing his comments to his mom and dad, “I thought you were going to tell us that we had to clean our rooms, but then you popped off with this huge question: ‘Do you want to move to America?’ I was just shocked!”

Georgia ’20, speaking softly and resonating a poised elegance, admits, “I kind of knew. I just had a feeling. But when I had been imagining moving as a possibility, the idea seemed exciting and fun. When I found out it was a reality, it seemed a bit scary.”

When the Benders face challenging family decisions, they have an extraordinary arrangement. “On big decisions in the family,” explains Deborah, “everyone has the genuine power of veto. Any one of us can do it.”

In deciding to move to America, the Benders did not have the luxury of time. Their goal, as a family, was to start school on the first day of the school year—that was only six weeks from the night of the telling. Six weeks to get visas. Six weeks to relocate. Six weeks to find a new school. And that’s only if they could decide.

The Benders fashioned their plan. First, they had a pre-arranged holiday scheduled to Costa Rica. They would add three days to their trip to visit Philadelphia to gather information.

“We had the help of relocation specialists,” explains Deborah. “They asked us what our values were. We were very keen that the school we chose reflected our own values.”

The Bender family had, by now, acquired some experience in the school search department. They had a very clear idea of what they sought.

They wanted a co-ed environment that fostered gender equality and provided strong role models. They sought a school with a reputation for academic rigor supported by a broad-based educational approach. While they valued academic challenge, they wanted to be sure the school incorporated life skills in education. It was essential that their chosen school align with their social values of social responsibility, tolerance, diversity, and support for peers and the wider community. And finally, they sought an environment that encouraged appropriate risk-taking while providing strong support.

Finding a school that fit each element of their criteria and, at the same time, reflected their values was a tall order, indeed.

All Roads Led to Shipley

For Georgia, Shipley stood out among the rest. “We just knew we wanted to go there, she says. "It was,” she struggles to capture the feel of her visit, “it was just nice. Everything was welcoming.”

James preferred Shipley hands down over the other schools as well. “During our visit to Shipley, they treated us like high school students. They respected us.”

For Deborah and Lloyd, The Shipley School matched the needs on their demanding list and even offered a plan for transition so the children would land lightly in their new classrooms.

On the third day of their Philadelphia visit, the deal was sealed. James, who had been the most reluctant at the start, signed off with an enthusiastic “Yes!” Off they flew to Costa Rica. “We were literally on the beach filling out our visa applications. We got the fastest visa applications ever,” remembers Lloyd with some excitement.

“It was a choice to come here,” reiterates Deborah. “We all had the power of veto, and we decided.”

The Benders knew that because they didn’t know anybody, they needed a school where they could make friends. “We care about the community, explains Deborah. “We care about the broader world. And we felt that Shipley shared our values. Every single friend we have, with very few exceptions, are from Shipley.”

“I made my best friend literally on the first day of school,” enthuses Georgia. “She came up to me and said, ‘We’re going to be friends!’” James settled in nicely as well.

“There was no friend trauma,” adds Deborah. “Shipley had set it up so all of the new girls were together, yet they were integrated into the rest of the group. How they did it, I have no idea. It was very deliberate and I know that because they told us that they were going to do it. Shipley has down to a T the integration thing,” Deborah says. “That made coming here and getting involved phenomenally easy.”

Shipley has proven to be everything that the Benders had hoped for, and more.

At the same time, Shipley provides support where it’s needed. Georgia continues, “Shipley helps you when they make it hard, instead of just making it harder and then ignoring you.” Lloyd agrees. “The great thing about it is that the teachers accommodate learning styles, but students are still required to learn the content.” Both children are heavily involved in Shipley’s music department. James loves the technology. And both Lloyd and Deborah are surprised by the social risks their children have been willing to take.

Such as the Middle School talent show.

“The environment at the show is fantastic,” explains Lloyd. “‘Stand up! Take a risk! Show your talent or not!’ I marvel at the fact that kids are willing to stand up. There are varying degrees of talent and everyone is supported by their peers.”

Deborah agrees, “If you had asked me if Georgia would be willing to stand up and perform a year ago, I would have said no emphatically, but there she was, on stage.”

It has been just over two years from that first night when the Bender family was faced with the decision to uproot once again—to face another adventure, yes, but also another transition. Has the move to America and to Shipley been a success?

This content was originally published in the Fall 2015 Shipley Magazine.
Back