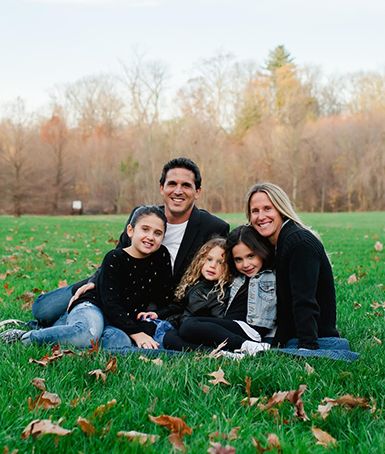 6/27/2016
Kathy Smith
Ben Willner ’96 never expected to send his children to the school that challenged him so much as a kid. His wife, Erica, a public school advocate, couldn’t have imagined sending her kids to a private school. Now, he can’t think of a better gift to give his daughters than the rigor and support of Shipley’s education, and she’s convincing her friends to send their children to Shipley. Read the Willner family’s Shipley story.
It couldn’t have happened better if it were planned.
As Ben ’96 and Erica Willner, current Shipley parents, walk into the new Shipley Commons to share their family’s Shipley story, Steve Baris, Chairman of Shipley’s Art Department, walks down the stairs toward them. They pass halfway, and stop.
“Mr. Baris,” Ben says in sudden recognition.
“Ben!” Mr. Baris exclaims. “It took me a minute.”Meaning, it’s been a while. Meaning, you’re all grown up.
As the three of them walk back up the stairs, Ben enthuses, “You had a huge impact on me, Mr. Baris. You have no idea. I still use all of those great skills you taught me, and I still have my artwork. You gave me a real passion for art.”
As they pause in front of Shipley’s new portfolio room, Mr. Baris thanks Ben and Erica for their contribution to the new building. “No-no.” Ben has none of it. “Thank you for all of your efforts in bringing it to life.” With a hearty handshake and a wistful goodbye, they part, and as Ben and Erica walk the rest of the way down the hallway toward the back gallery, it becomes clear that for Ben and Erica Willner, their Shipley story is no small thing.

Ben and Erica Willner are parents of three young girls, Jordan ’24, Madison ’26, and Hailey ’29, who will enter Shipley’s kindergarten next year. As they settle into the semi-circle cushions in the Chris Wagner Arts Center’s back gallery space, Ben shares his experience.
“I went here through tenth grade. My brothers went here, and I grew up in Villanova, but…” and here there is a hesitation, a wilt in the smile, and an awkwardness. “How shall I say this?” He pauses to look at his wife for permission. “I’ll be honest, I just hated it.”
The admission hangs in the air, a giant contradiction waiting for explanation. He obliges. “I worked with extra tutors. I had extra work sessions with teachers only to get Cs and some Bs. Shipley was one of the more frustrating, challenging parts of my life.” So why, one wonders, would anyone send children they love to a place they hated?

It Wasn’t a Coincidence

The story is complicated and involves a powerful revelation, the kind you can sometimes only get long after the fact. Ben, an avid ice hockey player, allowed himself to be wooed away from the rigor of Shipley to a nearby prep school by a travelling hockey team coach, only to find the academic life easy. With his heart set on Division I play, he transferred in his senior year to a boarding school in New England, where once again, he experienced a facility with academics.
In college, Ben discovered that he possessed a knack for organization and time management, and an aptitude for coursework. His success had to have come from the foundation formed, albeit somewhat painfully, at Shipley. “It was so frustrating for me here,” admits Ben, “But rigorous academia is what really prepared me for everything else. That is why I decided that I was going to send my kids to Shipley.”

The Power of Private

Ben and Erica met through mutual friends during the summer between their junior and senior years of college. Ben went into real estate and Erica sold children’s clothes. As a product of public schools, Erica had to be convinced that private school was the right choice for her kids. “Ben really had to convince me, because I didn’t understand why my children needed to go to private school,” she says.
Ben and Erica’s visit to the School was transformative. “When we came to visit, and when Dr. Piltch and Sylvia Spector explained that at Shipley, each child is treated as an individual, it struck a chord with me. That’s something you don’t get in public school. They know the kids here. They know their personalities. That is what sold me on Shipley.”

Could They Be More Different?

As is the case with so many families, the Willners’ children are all so very different. Jordan, known as Jordy, is outgoing. Madison, shy. And little Hailey? The jury is still out. She’s reserved in school and a spitfire at home. At Shipley, the Willner children take full advantage of the School’s dedication to each individual’s needs and aptitudes.
In fourth grade, Jordy came home with a poor grade on a math test. Erica wondered if she would benefit from extra support and wrote to the School. “Her teacher told us that Jordy did not need extra help and said it was just an off day for Jordy, which turned out to be true. In a way, her teacher knew her better academically than we did.”

Madison, Ben and Erica’s second grader, had a pervasive shyness when she entered Shipley in kindergarten. “She would barely talk to Mrs. Sklow,” recalls Erica. But by the time Shipley’s traditional Knights and Castles Ceremony came around in May of that year, they watched her get up and speak in front of the parents and her peers with great confidence. “That’s something I never got in public school,” shares Erica. Ben agrees with the enthusiasm of a parent who has seen a transformation in his daughter. “I’ll never forget all those speeches she’s made in front of her class, the confidence that she gets. She glows,” beams Ben.
“I almost cry,” Erica jumps in. “I do! She’s so far outside of her comfort zone. She’s come so far!”
Erica cannot say enough about her daughters’ growth at Shipley. “It has been amazing to watch our two daughters, who could not be more different socially and academically, both succeed here. And they’ve even had some of the same teachers who work with our daughters differently. They’ve each gotten individual attention. The teachers know who they are.”

Ben never expected to send his children to the school that challenged him so much as a kid, but now, he can’t think of a better gift to give them than the rigor and support of Shipley’s education. Whereas Erica couldn’t have imagined sending her kids to a private school, she’s now convincing her friends to bring their children here. As a further testament to their commitment to the School, the Willner family donated to the Chris Wagner Arts Center as part of their personal philosophy of giving back and a desire to help shape the future of the School.
“I never thought that I’d still be in the Main Line 20 years later,” shares Ben. “But I’ve experienced so many different places and cultures, when it comes down to where I want to raise my family, I realized how well-rounded my upbringing was. And I wanted my kids to have that same experience.”
Back