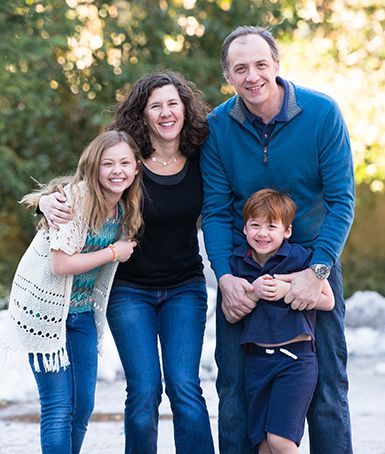 Choosing a School with Vision: The Benardete Family Story

5/12/2015
Kathy Smith
Niki and Ethan Benardete chose Shipley for their children because of the School’s emphasis on character education. For Niki, an educator and administrator herself, the vision of the Shipley community was quite clear, going above excellent academics to instill confidence and educate children about being the best people possible.
The Benardete's Shipley story began with a sighting. Two Yale students sporting Shipley sweatshirts walked across the quad of Branford College House, where Niki Benardete served as Dean. In a way, it wasn’t something you’d think twice about. Except that nearly a decade later, when Niki and her husband Ethan were searching for excellent independent schools in the Philadelphia area, Niki recalled those kids. “The Shipley kids stayed with me because they themselves were such great people—so well balanced, kind, smart, hard-working, and fun. I remembered where they went to high school because they were impressive as people, apart from their considerable intelligence and other gifts.”

The Best Version of You

After visiting several area independent schools, Niki and Ethan, a neurosurgeon at Jefferson and surrounding hospitals, met with Steve Piltch. “I wasn’t new to academia,” she says. “I had been an administrator. We were both impressed with the curriculum and the emphasis on individual development.” But they were interested in more. “Everyone has to learn how to count and read,” explains Niki of her philosophy about education, “but we wanted Chloe to be the best Chloe she could be. It’s hard to keep track of who you are when you really want to be liked. It was important to us that we helped our daughter become a really terrific version of who she was born to be. For our kids,” explains Niki, “we wanted a school with vision.”

In Steve’s office, the Benardete’s spoke of their hopes for Chloe. Within a few minutes, Niki became teary. “I just couldn't believe how kind this world was,” she smiles at the recollection. “When you’re in a strange world and nobody knows who you are, and the head of the school wants to know who you are, it is deeply touching. And that it was okay for me to sit there holding a tissue,” she laughs, “was even more touching. When it comes down to it, there is nothing more precious than your children. It seemed like we were in Oz with the real Wizard.”

When the Benardetes moved to the area in early January, Chloe loved Shipley from the very first day. It was a bit harder for Niki and then 17-month-old James to get settled. The best part of every day was the few minutes they’d spend in Chloe's classroom each morning with Mrs. Weitzel, then a second teacher, while Chloe was settling in. James considered it his classroom right away, especially since Mrs. Weitzel went out of her way to be welcoming. "Mrs. Weitzel would interact with him. She’d pick up his shoe and call him on the phone. He couldn’t talk, so she’d say, ‘I’ll call you later when you’re ready to talk.’ He’d be playing with things and every now and then she’d say, ‘Why don’t you take that home.’” Niki pauses in her telling. “We had just moved,” she explains. “We didn’t have any friends yet. I had a 17-month-old baby and Mrs. Weitzel was our first friend.”

Every now and then, a child struggles with something that can seem to be very minor to a grownup. If left unattended, however, small things can become big. “Somehow,” shares Niki, “it came out in Mrs.’s L’s sewing class that Chloe was feeling really tall. It’s a wonderful thing to be tall, except when you wish you weren’t.” Mrs. L., Lower School Social, Emotional, and Ethical Development (SEED) teacher and third grade second teacher, reached out to several girls across the school, from the Upper School to the faculty, and organized a “Tall Girls Lunch.”
“They talked about what it was like to be tall,” says Niki, “and what it felt like when they were little. After school, we went up to the Upper School to watch the older girl play tennis. It was terrific to see her pound the ball and see how her height was an advantage!”

The daily gestures and kindnesses, like the “Tall Girls Lunch,” like Mrs. Weitzel’s early friendship, are part of what make up the fabric of the intangible called the Shipley Community. For Niki, an educator and an administrator herself, the vision of community is quite clear. “I believe the community experience is made up by the everyday ways people take care of each other,” she explains. “People have the instinct to help a person because they want to make that individual’s life easier, plain and simple,” says Niki, “not because they’re going to get a gold star. Among the people that I know at Shipley, there are so many people who go that extra step to help.”

It’s Not Just a Look Book

While the Benardete’s Shipley story only recently began, they already have so many memories made and tales to tell. And best of all, there is the future to come. “Back when we first came to Philadelphia,” remembers Niki, as if it were a lifetime ago, “we went around to various schools and got ‘Look Books.’ When we actually arrived at Shipley,” she continues, “we felt the School hadn’t just created an appealing Look Book, but a living philosophy about how to create a world of young people who would become big people in the best sense; big people who would look out for little people; big people who would know the right thing to do in a given situation; big people who would have big ideas, big dreams, and big thoughts about how to make this place a better place, and how to make their own place within it comfortable to them. Shipley was the place we wanted to be.”
Back