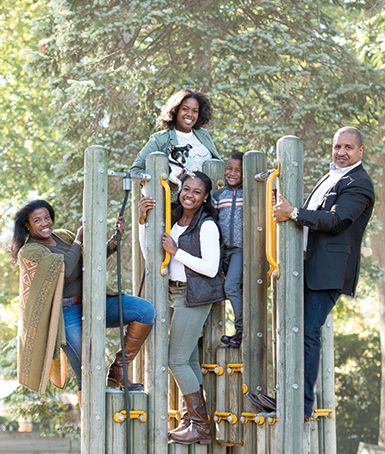 11/27/2017
Kathy Smith
Dee and Roy Gundy joined the Shipley community 16 years ago, when their daughter, Kaela ’15, was in kindergarten. A word-of-mouth recommendation put Shipley on their radar, but it was a commitment to each individual child that made them choose the School. Dee and Roy feel blessed that they are all thriving, despite their different interests, strengths, and traits. And even with their busy schedules, the Gundys find ways to give back to the community that has given them so much.
Each year, the Shipley community witnesses the passing of the baton from its senior class to its newest members during the time-honored Oaks to Acorns ceremony, but it is a rarity that the honor passes within a single family, sibling to sibling.
In the fall of 2014, Kaela Gundy ’15, presented the traditional pencil box to her younger brother Trey ’26 while sister Ashleigh ’18, mom Dee, and dad Roy looked on. Trey’s establishment in the Shipley community completes the circle for the Gundys. He is their last child. But he is also their baby. And the symbolism of the Oaks to Acorns ceremony is particularly strong.
This is the Gundy’s Shipley story. A story that, thus far, has spanned 16 years. With any luck, their story will continue for eight more.

Twenty years ago, when Roy and Dee were raising their first baby, Kaela, in the Philadelphia suburbs, they weren’t thinking about schools. They knew they wanted to send her to an independent school, but hadn’t considered specific details. They felt they had some time. Their neighbor, on the other hand, had different designs. “She had a child at Shipley,” explains Dee. “She saw us in the neighborhood and came by our house. She was raving about Shipley and told us we had to go.” Dee laughs at the memory. “Our daughter was only four months old at the time!”

Single Sex vs. Coed and The Whole Child

When it came time to choose schools a few years later, the Gundys stepped back. They faced the same question that many parents do: should they send their children to a single-sex school or coeducational one?
“I believed that the girls would blossom around other girls in same-sex education,” explains Roy. “Yet when we looked at Shipley, I saw that the girls were so independent, so confident, so smart and friendly—not only among themselves but around the boys. I saw the girls as young leaders,” recalls Roy. “When Steve Piltch spoke about Shipley and addressed the whole child, that sold us.”
“We actually toured the Lower School when it was under construction. They were still in hard hats,” adds Dee. “The warmth came through even so.”
When Trey came along years later and it was time to pick a school for him, the Gundys had already experienced what Roy refers to as the Shipley “formula” with their other two children, and they liked what they saw. “We knew Shipley would focus on the individual child, and we were hooked.”

There was a moment when Shipley almost lost the Gundys. Twelve years ago, when both Kaela and Ashleigh were in the Lower School, Roy received an offer in California that he couldn’t refuse.
“The strangest thing happened,” he explains. “Kaela asked if she could live with her aunt during the school year so she could stay at Shipley.
“I drove eighty-nine miles each way to work every day for over ten years,” says Roy. “I did it because I know it makes a difference.”

Steve Piltch’s comment about the individual child resonated with the Gundys because, like many families, their children are so different—with their own individual interests, traits, and strengths.
“Kaela cultivates genuine relationships and focuses on the experience of everything. Balance across the board—that’s what’s important to her,” says Roy. “Shipley embraced Kaela’s social side and wove in the educational piece.”
Ashleigh, Dee and Roy’s middle child, is driven. “She is competitive both in the classroom and on the field,” says Dee. “She wants top grades. She wants to play Division I Lacrosse.”
“That’s right,” agrees Roy. “And if you tell her she can’t do something…” He shakes his head knowingly. “Shipley has been able to provide the appropriate environment for her.”
“Trey? To be continued,” jokes Dee. “In all seriousness, it’s a blessing to have all three thrive. It’s a blessing to have all three in one place.”

Making Time to Give Back

Dee and Roy both work. Dee is a practicing gynecologist and Roy travels a great deal. Parenting while working full time is challenging, but they’ve come to know what to expect. “Knowing that our kids are in a safe, secure environment, in a place they want to be, puts me at ease,” says Dee.
Both Dee and Roy are actively involved with Shipley. Roy is a Trustee on Shipley’s Board. Dee is a Parent Ambassador. “Many times working parents can feel that there just isn’t time for it,” says Roy. “But we want to give back for what the School has done for our family, and the School has created an environment that makes us want to be involved.”

The Gundys feel very connected to the entire Shipley community. “Connection,” adds Dee, “is part of the tradition, and that is what we were looking for from the beginning.”
Dee and Roy felt the strength of the Shipley community when they needed it most. Just after Trey’s birth, Dee had a cardiac arrest. She ended up in the hospital with a new baby at home, two young daughters, and a husband whose job required travel. Roy took off work but the load was overwhelming for one family.
“Parents of both of the girls’ classmates organized meal deliveries and made heart-healthy recipes. People helped with the baby,” says Dee. “We already felt part of the Shipley community, but that experience confirmed how sincere and genuine the community is.”
“In our time of need,” adds Roy, “Shipley responded like a family. It was the Shipley way.”

“Our story has been amazing,” reflects Roy. But it’s far from over.
In 2015, Kaela graduated. Trey, according to tradition, presented her with a scroll he made to complete the year-long Acorns to Oaks ceremony. For the Gundys, the experience was particularly poignant. As Kaela left for college, the first chapter of the Gundys’ Shipley story came to a close.
Ashleigh is now a senior, making big plays on the field, and Trey, so near the beginning, is taking one more step toward defining himself within the Shipley community.
“We have a lot left to do,” says Dee, but the Gundys have little concern.
“I’m not worried,” says Roy with confidence. “We’re sold on the formula. We don’t know what’s going to happen, but we know it’s going to be good.”
Back